Join us for our final write-a-thon Sunday, December 12, noon – 2 pm at the  Chocolati in Wallingford! Update below on featured cases, food drive and Amnesty swag. Join us! 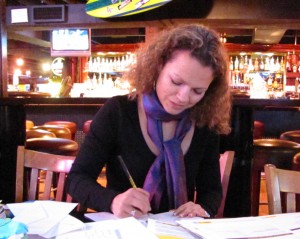 Each year, hundreds of thousands of people across the world mark International Human Rights Day by taking part in Amnesty International’s Write for Rights Global Write-A-Thon, the world’s largest letter writing event. We write letters to demand that the rights of individuals are respected, protected, and fulfilled. In doing so, we show solidarity with those suffering human rights abuses, and we work to bring about real change in people’s lives.

DETAILED INFO FOR WRITE-A-THON!
At the Wallingford Write-A-Thon on Sunday:
1. SHOW YOUR SUPPORT FOR HUMAN RIGHTS: Get nifty Amnesty swag for the holidays! Swag includes awesome t-shirts to show support for Shi Tao, as well as the counter terror with justice campaign and health care as a human right, pins, pens, and coasters!
2. PARTICIPATE IN A VIDEO ACTION for Majid Tavakkoli, the Iranian student activist and prisoner of conscience!
3. We will be focusing on the following five cases (please note that all of the other 2010 Write-A-Thon case sheets and sample letters will also be available):

– SHI TAO, Journalist and Prisoner of Conscience (a special case for Group 4)
In April 2004, the Chinese journalist Shi Tao used his Yahoo! email account to send a message to a U.S.-based pro-democracy website. In his email, he summarized a government order directing media organizations in China to downplay the upcoming 15th anniversary of the 1989 crackdown on pro-democracy activists. Police arrested him in November 2004, charging him with “illegally providing state secrets to foreign entities.” Authorities used email account holder information supplied by Yahoo! to convict Shi Tao in April 2005 and sentence him to 10 years in prison. Amnesty International considers Shi Tao to be a prisoner of conscience, imprisoned for peacefully exercising his right to freedom of expression, a right protected in international law and the Chinese constitution.
More info: http://www.amnestyusa.org/individuals-at-risk/priority-cases/china-shi-tao/page.do?id=1101243

– MAJID TAVAKKOLI, Student Activist and Prisoner of Conscience
On 7 December 2009, Majid Tavakkoli was arrested after criticizing the Iranian government during a peaceful student protest at Amir Kabir University of Technology in Tehran. The protest, held on National Student Day, was one of many across the country in response to the disputed presidential election that took place in June 2009. After his arrest, Majid was reportedly beaten and subjected to an unfair trial where he was denied the presence of his lawyer. Majid Tavakkoli was sentenced to over eight years in prison on charges that included “participating in an illegal gathering,” “propaganda against the system” and “insulting officials.” He is a prisoner of conscience, jailed solely for peacefully exercising his human right to freedom of expression.
More info: http://www.amnestyusa.org/writeathon/caseindex.php?i=8

– WALID YUNIS AHMAD, Unlawful Detention
Walid Yunis Ahmad went missing after his arrest on February 6, 2000. For three years, his family wondered if he was alive before learning that he was detained and tortured by authorities in Iraqi Kurdistan. After more than 10 years, the security agency, Asayish, continues to hold him even though they have yet to charge him with an offense or bring him to trial. He remains in solitary confinement. Amnesty International calls on authorities in Iraq to release Walid Yunis Ahmad if he is not promptly charged and tried.
More info: http://www.amnestyusa.org/writeathon/caseindex.php?i=9

– REGGIE CLEMONS, Death Penalty
Reggie Clemons was sentenced to death in Missouri as an accomplice in the 1991 murder of two women. Clemons has maintained his innocence, and his case illustrates many of the flaws in the U.S. death penalty system. For example, at the time of the trial, the prosecution conceded that Clemons neither killed the victims nor planned the crime; there is no physical evidence that ties him to the crime itself or the events leading up to it. Clemons alleges that he confessed under the pressure of police brutality to raping one of the victims. He never confessed to the murders. He subsequently retracted his confession. Two other suspects independently alleged mistreatment by the police. Witnesses attest to Clemons’ face being swollen after his interrogation. Four federal judges have agreed that the prosecutor’s conduct was “abusive and boorish.”
More info: http://www.amnestyusa.org/writeathon/caseindex.php?i=12

Do all those letters help? Oh, yes!

See some of our successes at: http://www.amnestyusa.org/writeathon/successes.php