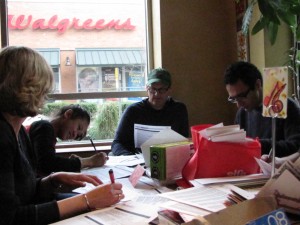 Write for freedom and justice of individuals around the world. This year’s cases include Nabeel Rajab imprisoned for organizing protests in Bahrain; 3 members of the Russian punk collective Pussy Riot convicted of hooliganism for a protest song; justice for Noxolo Nogwaza, who was raped and killed probably for being a lesbian in South Africa; Monica Roa, threatened for advocating for South African women’s access to safe and legal abortion; Reggie Clemons on death row in Missouri; The Committee of Relatives of the Detained and Disappeared in Honduras threatened for their work in Honduras;  human rights lawyer Gao Zhisheng, “disappeared” in China; Girifna, a Sudanese youth group calling for non-violent resistance to the government; Hussain Salem Mohammed Almerfedi detained at Guantanamo without charge since 2003; and the people of Bodo in the Nigerian Delta, devastated when a Shell Oil pipeline spilled thousands of barrels into their local creek.

For more information on the write-a-thon including current cases and past successes see:

This entry was posted in Amnesty International, Write-a-thon. Bookmark the permalink.