Join us and allies on June 3 & 4 for two Tianamen Square memorial events at the University of Washington (details below). Because of the time conflict with the June 4 event (and also because the cafe is temporarily closed due to flooding), we will not be having our June monthly meeting at the Mosaic Coffee House. 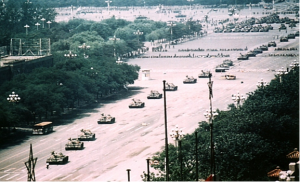 On Monday June 3, 6 pm – 8 pm, Room 119, William H. Gates Hall, UW’s Center for Human Rights & Justice is marking the 24th Anniversary of the Tiananmen Square Massacre with the showing of a documentary film followed by a moderated discussion of the day and why it is still relevant.

Then on Tuesday June 4, 6:30 pm at UW’s Thompson Hall, Room 101, Amnesty International, the University of Washington’s Center for Human Rights and other allies are sponsoring a special commemoration of the 24th Anniversary of the Tiananmen Square Massacre, “In Search of Guidance from History to Build a Democratic China,” featuring Feng Congde, a 1989 Student Leader as the keynote speaker.

This entry was posted in Amnesty International, China. Bookmark the permalink.