As we pass the second anniversary of Troy Davis’ execution by the state of Georgia, join Amnesty International and our allies on Wednesday, October 2nd, 7 pm at Elliott Bay Books as author Jen Marlowe, Kim Davis (Troy’s sister), Oscar Eason (NAACP Alaska-Oregon-Washington State Conference President) and others, in the words of Haymarket Books, “reflect on Troy Davis’s legacy, celebrate the remarkable success that the movement to end the death penalty has achieved, and launch the book ‘I Am Troy Davis‘, co-authored by Jen Marlowe and Troy’s sister Martina Davis-Correia, with the participation of Troy himself.” 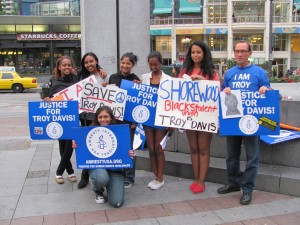 On September 21, 2011, the state of Georgia shamefully executed Troy Davis despite serious doubts about his guilt. With his final words, Troy issued a call to continue to “fight this fight” against the wrongs that cost him his life. On the two-year anniversary of his execution, make a pledge in Troy’s memory – together we can win the fight to abolish the death penalty.

Add your name today at www.amnestyusa.org/pledge4troy and on October 1, two years to the day since Troy’s family grieved at his funeral, we will deliver to his family your commitment to put an end to the death penalty once and for all.