Rock out with us and 5 bands for an Amnesty International benefit concert to free the Russian punk band Pussy Riot on Saturday, September 15th, starting at 7 pm at the Benbow Room, 4210 SW Admiral Way in West Seattle. Suggested donation of $10. Bands include Rabbit Skin Glue, The Springboards, Safeword Sasquatch, TBASA, and Michael O’Driscoll.

Maria Alekhina, Ekaterina Samutsevich and Nadezhda Tolokonnikova, three members of the all female Russian punk band Pussy Riot were sentenced to 2 years at a prison colony on August 17, 2012 for “hooliganism on grounds of religious hatred” for performing a protest song with the lyrics “Virgin Mary, redeem us from Putin” at a Russian cathedral on February 21 with their faces covered with balaclavas. 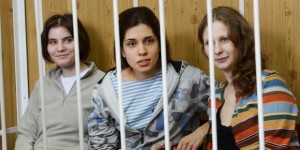 Pussy Riot members behind bars in a Moscow court

Amnesty International considers Maria Alekhina, Ekaterina Samutsevich and Nadezhda Tolokonnikova to be prisoners of conscience, detained solely for the peaceful expression of their beliefs.

Video by the Pussy Riot punk collective thanking their supporters: