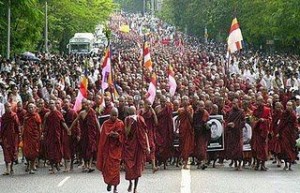 (Seattle, WA) – Four years ago, hundreds of thousands of peaceful protestors led by monks took to the streets of Burma triggered by an overnight spike in fuel prices by the government of up to 500%. On September 26, the military regime launched a violent crackdown, arresting over 3,000 people and raiding monasteries.

Next week, events will be held around the world to commemorate the 4th anniversary of Burma’s 2007 “Saffron Revolution.” Please join us at 5:30 pm, Sunday, October 2, at the south end of Seattle’s Green Lake for a reading of the Metta Sutra (loving kindness prayer), candlelight vigil, and peace walk around the lake.

It has been four years since the Saffron Revolution took place, and nearly 2,000 political prisoners – including 222 monks – remain behind bars. Those responsible for the brutal crackdown in 2007 are still running the country and continued to commit serious human rights violations, especially in ethnic areas in Eastern Burma.

“Please use your liberty to promote ours.” – Aung San Suu Kyi

Please demonstrate your support for genuine change in Burma by joining us at Green Lake on October 2, and by encouraging friends and colleagues to join you. We would like to invite everyone who believes in peace and justice, from all faiths and all walks of life, to participate in this commemorative event.

This entry was posted in Myanmar and tagged Burma. Bookmark the permalink.