Join Amnesty International, Washington State Religious Campaign Against Torture, and other justice activists on Weds. January 11, 5-6 pm in front of the Jackson Federal Building to

**Protest torture and other inhumane treatment of prisoners anywhere

**Protest Congress and the President’s action to “legalize” indefinite detention without charges or trial, and other violations of the Bill of Rights (part of the recently passed & signed into law NDAA, National Defense Authorization Act of 2012) 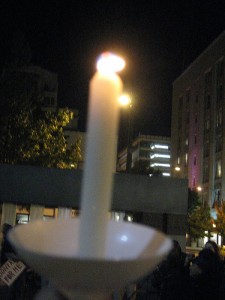 Wednesday January 11, 2012, 5-6 pm, on sidewalk outside of the Jackson Federal Building, 2nd avenue between Madison and Marion, downtown Seattle; if you can please bring a candle in a container to protect against wind (paper cups with holes in bottom work) and if you can, a sign indicating your opposition to indefinite detention and torture and/or your support of the Bill of Rights.

The Seattle Vigil will be one of many actions around the country. See the National Religious Campaign Against Torture website http://www.nrcat.org/ and also Amnesty International USA‘s Day of Action website http://www.amnestyusa.org/events/sign-up-day-of-action-against-guantanamo for more information.

Additional action you can take:

This entry was posted in Amnesty International, Guantanamo, Security with Human Rights, Torture, War on Terror. Bookmark the permalink.