Join Amnesty International, the Washington State Religious Campaign, and a coalition of groups to mark June 26th, the UN International Day in Support of Victims of Torture. 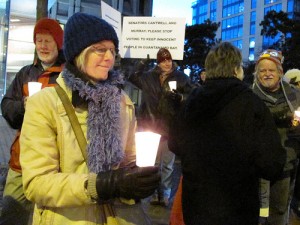 STAND UP TO REMEMBER THE VICTIMS OF TORTURE.  ADD YOU VOICE TO HELP END TORTURE ONCE AND FOR ALL.

Dramatic Readings from “Reckoning With Torture”

“Torture is a Crime.  Impunity is Intolerable.  Evidence is Abundant.
Investigate U.S. Torture.  For Justice.  For Healing.”

This entry was posted in Amnesty International, Guantanamo, Torture, War on Terror. Bookmark the permalink.